Villina-VS1-М, Villina-GNVC-K and Villina-GNGC-K type centrifugal canned pump units with combined seals are widely used in modern gas industries, petrochemical and petroleum refining industries. They are designed for transiting neutral, corrosive, toxic, as well as explosive and flammable liquids in stationary conditions, the vapors of which can form explosive mixtures with air. 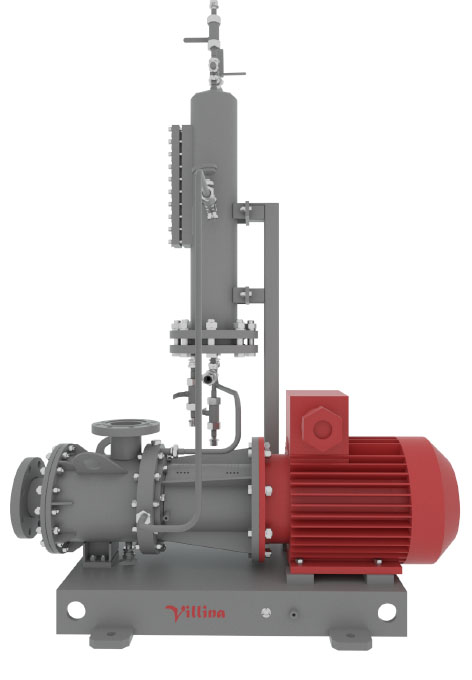 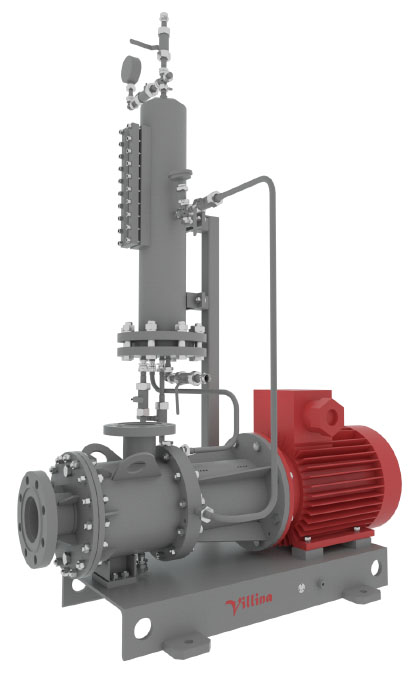 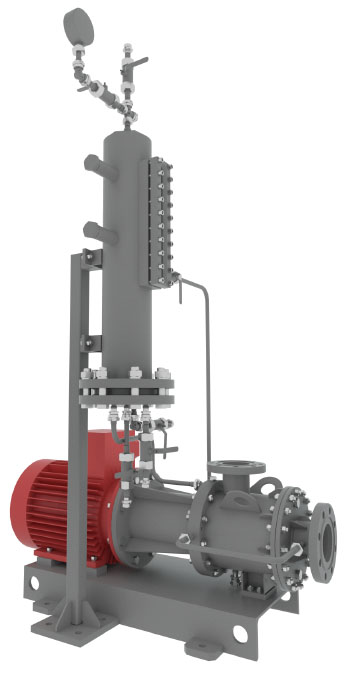 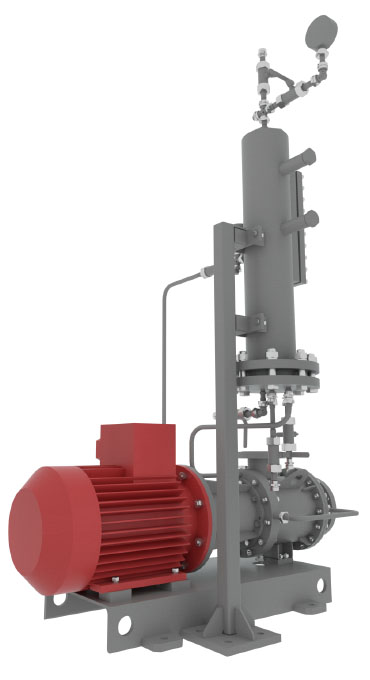 Villina type units are made in three versions as regards the spatial location of the pump rotor:

The tightness of the pumps is ensured by the use of a mechanical seal and a magnetic coupling with an isolation shell which transmits torque from the drive.

The pumped fluid is separated from the magnetic coupling by a buffer chamber filled with barrier fluid and by a single mechanical seal, which allows for pumping fluids containing large and ferromagnetic particles.

The magnetic coupling consists of a driven half coupling in assembly with the pump rotor and a driving half coupling mounted and fastened to the electric motor shaft. The half couplings are separated by an isolation shell of non-magnetic material.

The driven and driving parts of the coupling are engaged together by magnetic forces of rare-earth permanent magnets located under the ferrules of the magnetic half couplings. The magnetic coupling of the half couplings provides non-contact torque transfer from the electric motor to the pump shaft.

The main components of the mechanical seal are O-rings, which are subjected to the mechanical force generated by the springs or bellows, and the hydraulic force generated by the pressure of the operating fluid. The O-ring that rotates with the shaft is called the "rotating ring". The O-ring mounted on the pump body is called the "stationary ring".

Tightness is achieved by pressing the parts tight to the end faces. The stationary and rotating faces serving as the main sealing element are made of special materials with high quality machining of friction surfaces to ensure maximum tightness.

The type, design and sealing materials of the moving elements are selected depending on the operating conditions and the properties of the pumped fluid. Mechanical seals are used in combination with a mechanical seal support system which maintains the temperature of the fluid in the buffer zone corresponding to the heat resistance of the seals and cools the isolation shell which is heated by eddy currents during operation.

The barrier fluid can be oil, glycol, antifreezing agent and other lubrication liquids that do not interact with the pumped fluid.

For cooling with barrier fluid, the units are equipped with a Villina manufactured support system with a heat exchanger that meets the requirements of API 682 standard.

At the customer’s request, the support system can be equipped with an automatic monitoring and protection system that provides control of the barrier fluid temperature, level and pressure.

Villina pumps with combined seals are completely leakproof, have long service life and are highly repairable.

FILL IN THE QUESTIONNAIRE